NATIONAL AWARD Conferred to 'Kamdhenu Gaushala' of DJJS in Pune, Maharashtra
All Categories

Kamdhenu Project, first of its kind, is an initiative of DJJS which aims at preservation, breed improvement and creating awareness regarding use of Indian breed of cows. The project has made its mark in the field of quality of scientific research and impeccable International quality standards. Over the years, the program has gained traction amongst scientist, agriculturist and students. The project is a “LIVE” demonstration of dedication, love and scientific acumen of the people preserving the rear breed. In the program, Mr. Shankarlal (Gauseva Pradhan, Nation Self-Service Association (RSS)) was the special dignitary. Swami Chinmayanand Ji and Swami Indreshanand Ji registered their presence there on behalf of DJJS. Swami Chinmayanand Ji lectured on the breed conservation and improvement of Maharashtra’s own ‘Khillar’ breed of Indian cow. They also explained how we can use the scientific techniques to rejuvenate the best breed of indigenous cow in India. After listening to his lectures, Shri Mahadev Jankar Ji said that very soon they will conduct the program of representatives of Kamdhenu Gaushala in the Animal Husbandry Ministry (Mumbai) in which the senior officers of the department will be called. He also mentioned that collaboration will be done with Kamdhenu Gaushala in this regard. 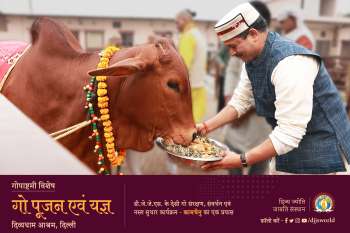