Shri Krishna Katha Enlightened the Hearts of People of Gharsana, Rajasthan with Spirituality

Shri Krishna’s life was a model for people in days past, the modern world and surely for those in Ages to come. His glory is unsurpassable. His story is a source of joy and inspiration for people from all walks of life. 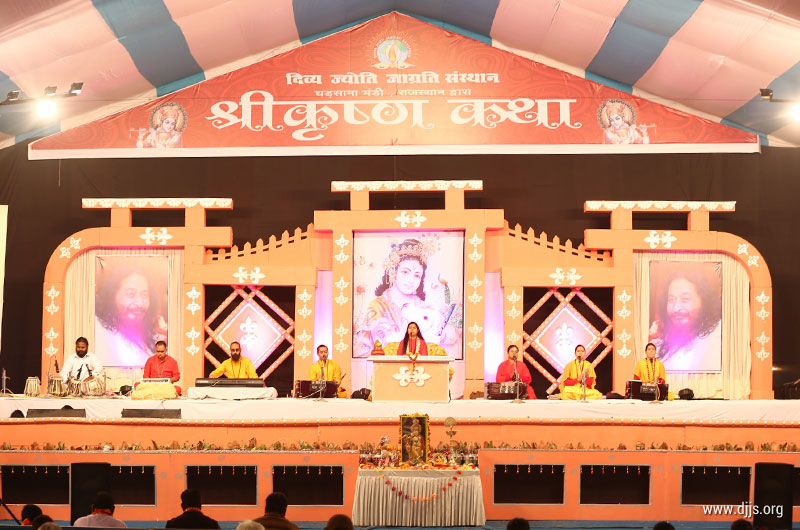 Large number of devotees gathered to attend this peaceful and spiritual discourse. Several dignitaries marked their presence at this event. The inspiring lyrics of devotional songs touched the core of hearts of the people who heard them with rapt attention.

The Katha orator Sadhvi Tripada Bharti Ji (disciple of Shri Ashutosh Maharaj Ji) beautifully explained that “Sri Krishna incarnated on Planet Earth to annihilate the philosophies of world-shunning spirituality and of world-grasping materialism. He established on Earth the “Dharmarajya”, the Kingdom of the Inner Law. He restored the true spirit of Kshatriya heroism, motivated not by human ego, but by Divine Will, making man a devoted and active instrument of the Supreme. He brought down to the Earth, consciousness the supreme Truth, that Earth and earthly life, being inherently divine, must be made outwardly divine, fully and totally, in every sphere and in every aspect. During the Battle of Kurukshetra, Krishna blessed Arjuna with the immortal spiritual discourse of the Bhagavad Gita. Krishna taught the spiritual path of wisdom, devotion and discrimination. The central message of Sri Krishna was for man to take part in desire-less action, motivated not by human ego, but for the Divine Cause.

Lord Krishna made an indelible impression upon mankind's collective consciousness, re-educating the world about devotion and dharma as well as the Ultimate Reality. Throughout his life, Krishna enacted so many roles and at the same time He did not forget that they were just roles, and that his true nature was eternal, ever blissful consciousness. In this way, he was able to remain detached and thus perform flawlessly, never allowing the smile to disappear from his face. His life was a perfect example of how to remain without getting scorched in the midst of worldly fire. The only thing which can bind Him is the loving devotional service of His devotees.

Further, the Katha orator said that the Soul, which is the integral part of the Supreme Soul, is an inexhaustible treasure of bliss; however, this perennial source of happiness can be harnessed only upon learning the real art of meditation i.e. “Divine Knowledge” through the benign grace of the Perfect Master of the time. Through this Eternal Technique we can practically experience and realize divinity within us.

The same inner awakening is provided by today’s Perfect Master Shri Ashutosh Maharaj Ji in the form of ‘Brahm Gyan’. By realizing oneself, one can have the balance of materialistic and spiritual goals, thereby living a contended and peaceful life. Inner-awakening brings immense joy, not merely an ordinary benefit. The more one is united with that ultimate level, the more is the blessedness that it will bestow. This is what is called the grace of God – the grace of the higher total on the lower total.”

The program concluded gloriously with ‘Katha Gyan Yagyna’ and many people were initiated into Brahm Gyan.