The people of Ludhiana, Punjab experienced Divine Bliss as DJJS organized Shri Krishna Katha. It was 5 days long programme that started on 5th Jan’16 and closed on 9th Jan’16. Devotees & followers from nearby areas gathered in large number to enjoy the bliss spread by the Katha. Splendid stages, customary worship and peace-marches organised were the highlights of the event. The peace marches spread divine vibes of love and brotherhood across the streets. Colourful Kalash Yatra was also taken out a day before the Katha. The Katha Orator Sadhvi Garima Bharti Ji in her discourse included many stories from the life and pastimes of complete incarnation of Lord Krishna. The intense and personal Bhakti described during the orations is directed toward Krishna as Vishnu in the human form. It included the most comprehensive collection of stories about the life of Krishna, showing him in all the stages and conditions of human life. The Katha was not a simple storytelling, but was an oration of profound veiled meaning of it which can’t be understood by a human being unless told by a perfect master. Sadhvi Ji, under the guidance of perfect master of today, HIS holiness Shri Ashutosh Maharaj Ji did just that. She explained thoroughly the true meaning of Bhakti, how to practice Bhakti, an analysis and descriptions of the different types of Bhakti. The Katha held out the possibility of salvation through devotion (Bhakti) regardless of caste or social status. True Bhakti is possible only when a human being surrenders himself/herself in the feet of a perfect master and attains the knowledge of Brahm Gyan. Only then, one can know the goal and target of his/her life.

The event was further enriched with chanting of holy hymns & devotional songs and insightful presentations. The melodious bhajans acted as a panacea to divert the minds of masses from materialistic world.

The aim of this magnificent event was to escalate the message of Self -Awakening i.e. Brahm Gyan among the people. The gathering felt greatly enriched with the invaluable message, and inspirations that were revealed from the transcendental pastimes of Lord Krishna 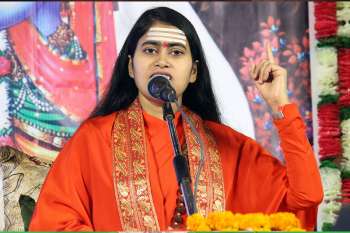