The Elysian Discourse of Shrimad Devi Bhagwat Katha in Nagpur, Maharashtra Initiates Devotees to Know the Shakti Within, an Epitome of Spiritual Liberation 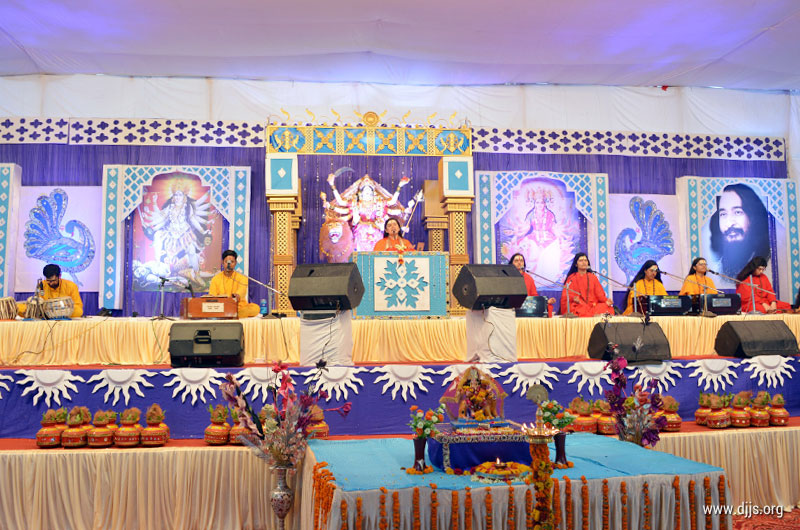 That Omnipresent Bhagwati is ever the cause of bondage of all when She casts Her net of delusion and She is again ever the cause of liberation when She imparts Her knowledge to human being. She resides in all the beings as the essential vital Force; deprived of that Force, every being is reduced to a carcass. She is pervading as the Universal Force of Consciousness in all the beings. The form of this Shakti (Force) is the form made up of consciousness itself. Resonating this paradigm of spiritual fact, Divya Jyoti Jagrati Sansthan organized Shrimad Devi Bhagwat Katha Mahapuran from 26th April to 2nd May 2017 at Nagpur, Maharashtra under the divine guidance of His Holiness Ashutosh Maharaj Ji (Head and Founder of DJJS). The program commenced with the sincere prayer at the lotus feet of Maa Shakti. The program comprised of various musical symphonies that filled everyone’s spirits with joyous devotion towards Ma Bhagwati.  The Katha orator Sadhvi Aditi Bharti Ji profoundly explained that the real Bhakti begins when the supreme secret of Almighty is revealed within. She narrated the great epic of Devi Bhagwat and divulged the hidden divine secrets and scientific reasoning of the scripture. She explained that all our scriptures suggest that the Supreme is subject matter of actual realization within and not just about the reading, listening or discussion. Every human being’s only Dharma is to behold the Infinite Nature of Maa Shakti within; which is the highest nature without any limitations; via the process of eternal science of Brahm Gyan. Worship is internal when one’s heart gets diluted in Para Brahma, of the nature of the Universal Consciousness.

Emphasizing further on Brahm Gyan, the learned Sadhvi Ji explained that it is an eternal technique of meeting with God face to face at all times. In present time His Holiness bestows the seekers with the same Brahm Gyan technique and connects with Sole Supreme Power. With this Sadhvi Ji also affiliated focus on some the dreaded issues of society, primarily on condition of women in today’s times. She spoke on Organization’s various social initiatives such as Santulan, Kamdhenu, Manthan, Sanrakshan, Antarkranti, Antardrishti, Bodh, Aarogya - all as crusaders towards the Organization’s mission of World Peace.

Many attendees were mesmerized by the lucid flow of Katha and not only appreciated the work of the organization but also contributed generously. Many volunteers contributed with their selfless service to make this event a great success.