“Yoga is the journey of the self, through the self, to the self.” A simple saying from Bhagawad Gita speaks volumes about the importance of yoga. Antarkranti organized three days ‘Vilakshan Yog Shivir’ from 23rd to 25th November 2016 at Central Jail, Amritsar, Punjab, for the prisoners with an aim to spread awareness among them about the physical, mental and scientific benefits of Yoga. Shri Raj Kumar Ji, Yoga Acharya of Divya Jyoti Jagrati Sansthan, led the Yoga & Dhyan Camp. Swami Ranjeetanand Ji, DJJS Representative, delivered the lecture on importance of adopting Yoga in day-to-day life. The benefits of Yoga and dhyan were addressed to in detail. 140 inmates were the beneficiaries of the session. The session was initiated with warm up activities followed by various Yoga Asanas and Pranayama, concluding in meditation session. The inmates were seen to be refreshed after the sessions. 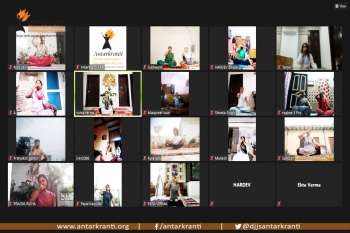