Divya Jyoti Jagrati Sansthan organised the spiritual event of Shrimad Bhagwat Katha Gyan Yagya from 24th to 30th May 2022, at the holy city of Kashi, under the supreme guidance of His Holiness Ashutosh Maharaj Ji. Ahead of this 7-day long spiritual feast, Katha Vyas Sadhvi Aastha Bharti Ji and the other team members paid their reverence to Mother Ganges by performing Mangal Aarti, and sought her divine blessings. The program attracted attention from scores of institutions and people in and around the city. The katha kick started with magnanimous peace procession called Kalash Yatra, wherein hundreds of women carrying sacred Kalash marched through the city. The captivating bhajans with insightful lyrics and katha narration with beautiful hymns created an atmosphere filled with divine vibrations that engulfed the city. The Katha unveiled the mystical secrets of Divine Eye or Shiv Netra to masses. Sadhvi Aastha Bharti Ji drew the picture of paradoxical and declining state of human society. She said that today, there are increasing number of policies, treaties and various other initiatives to establish peace and stability in the world. However, the state of mankind is increasingly deteriorating. The restlessness inside human beings is witnessed today in the form of clashes, wars, civil wars, global warming, decline of character, culture and value system. It is so because we are nurturing and watering the leaves and branches of the tree (symbolising mankind) and completely ignoring the roots (i.e., the mind of an individual).

Without the Inner Awakening of beings to the eternal and perennial source of positivity, i.e. the Supreme Lord residing inside us, stability cannot be achieved on the outside.

Sadhvi Ji urged one and all to seek that eternal science of Self-realisation as was revealed by Lord Krishna to His devotees. She emphasised that on being initiated into Brahm Gyan by the Perfect Master of the time, we get the first-hand experience of Soul/Atman. Our Inner Self, which is the storehouse of peace, selflessness, morality and strength – on getting established in it, we too are filled with these attributes.

Many prestigious guests attended the program and highly appreciated the efforts of the organisation. The glorious event was covered by many media houses such as Hindustan, Amar Ujala, Dainik Jagran, Aaj, Rashtriya Sahara, Satta Sudhar, Azad Patra, Veer Arjun, Ayodhya Times, Navdrishti Times, Dainik Janvaani, Delhi UpToDate etc. The Katha program was also made accessible to devotees across the world through its Webcast on DJJS YouTube Channel. A large number of devotees grasped the essence of Shrimad Bhagwat Mahapuran and stepped forward to get initiated into Brahm Gyan, which is the true purpose of human life. 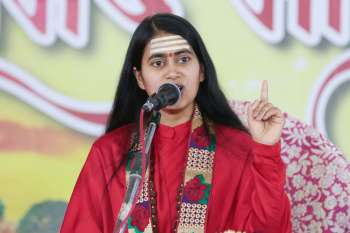 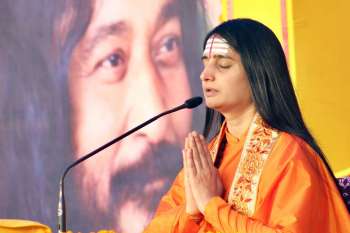