Instilling the spirit of devotion in the masses with Shrimad Devi Bhagwat Katha at Pathankot, Punjab
All Categories

Instilling the spirit of devotion in the masses with Shrimad Devi Bhagwat Katha at Pathankot, Punjab

“Self-Realization is not the privilege of a few, but the right of all the humans. Every human born has the right to realize the Divine Lord within himself.” To spread this message of self-realization, Divya Jyoti Jagrati Sansthan organized a 9 days Devi Bhagwat Katha from 13th to 21st April 2018 at Pathankot, Punjab. Sadhvi Tripada Bharti Ji, a devoted disciple of Shri Ashutosh Maharaj Ji, was the orator of the Katha. The Katha commenced with the Kalash Yatra, which is a procession of women carrying Mangal Kalash on their heads while chanting the Vedic Matras and sending an open invitation of the event to the masses. The procession created a divine positive environment. The Katha commenced with prayers in the lotus feet of Devi Maa. Sadhvi Tripada Bharti Ji narrated innumerable spiritual episodes from Devi Bhagwat, thus evoking the feelings of devotion in the hearts of the disciples. She revealed various incarnations of Devi Maa while explaining the significance of each form. She spoke at length about Maa Kali, the incarnation of the Devi, who came to eradicate evil from the face of earth. She is called the Goddess of Destruction and Power.

Sadhvi ji narrated the tales of the various forms of Devi and touched upon the plight of women on today’s world. She further elucidated that a mother can be a nurturer as well as a destroyer. A woman, who is a nurturer by nature, can take the form of Kali, when it’s a matter of her prestige and esteem. Speaking about the increasing crime against women, Sadhvi ji, reiterated that women need to realize this inherent power in them and stand up for themselves when challenged.

She also spoke about the efforts that DJJS is making in the society to empower women, under the project called Santulan, which is a gender equality program run by the organization.

Sadhvi Ji stressed on the need to eradicate all the crimes and inequality meted out to women, for which it is important that every human realizes the Divine within and the only way to bring about this mind revolution is through self-realization, which is called “Brahm Gyan”- or Divine Knowledge. However, only a true self-realized perfect spiritual master can initiate a person into this divine knowledge.

Sadhvi ji successfully spread the message of Brahm Gyan to the present masses and encouraged them to realize the Divinity within. The amalgamation of the Katha along with melodious devotional bhajans rendered by the devoted musicians, created a peaceful divine environment.

The masses turned out in thousands for the event, thereby making it a humongous success. The Katha concluded with a ‘Hawan’, leaving everyone present wanting for more and yearning to realize their real selves. 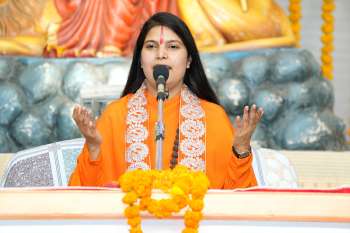 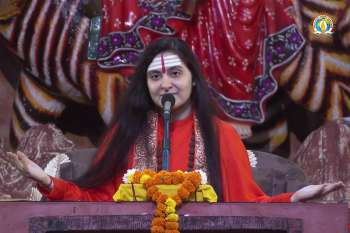