Divya Jyoti Jagrati Sansthan (DJJS), under the divine guidance of His Holiness Ashutosh Maharaj Ji, organized a five day epic saga of devotion and spirituality, Shri Krishna Katha at Karnal, Haryana from 1st to 5th November 2022. DJJS Katha orator and preacher disciple of His Holiness Sadhvi Soumya Bharti Ji unravelled the majestic teachings from the life of Lord Krishna and explained the true meaning of it to the devotees present in large numbers who marked their valuable presence. In today’s flimsy world the definition of Divine Love & Devotion seems to have lost its essence, as people are keener on immersing themselves in the sea of earthy desires. They seek peace in trivial affairs and show-off worldly practices; wherein true divine love can only be realized from within and can be attained with the blessings of a Perfect Master. It is a fact that Devotion is not a matter of body or mind; it is the supreme union of souls. It knows no ego or lust; neither greed nor it is merely an attachment which breaks easily. It’s the pinnacle of ecstasy and can only be accomplished by Brahm Gyan. Our ancient scriptures have ample examples of the same. Shri Krishna Katha is an epitome of devotion, be it Lord Krishna, Radha or other soul mates in the form of Gopikas.

Sadhvi Ji in her spiritual discourse explained how devotion (Bhakti), being the epitome of love, can be achieved by the great souls who go through turmoil yet do not waiver a bit. She further provided example of mother Yashoda who protected her little Krishna from all harm, poured maternal love on Him and still called herself only a dasi (servant) of Lord. The beloved Radha who had purest feelings for Lord Krishna, did not take any offence on the scornful remarks by the villagers for her proximity to her flute bearer Krishna. All Gopikas of Vrindavan who loved Krishna selflessly did not have a trace of envy for each other. Lord Krishna had a unique bond with each one of them so much that each could feel its own Krishna with herself. Satguru Shri Ashutosh Maharaj Ji the perfect master of today’s era, has sowed seeds of devotion in his disciples through Brahm Gyan. Brahm Gyan creates that supreme bond with God thus brings one closer to God. The Katha held out the possibility of salvation through devotion (Bhakti) regardless of caste, creed, religion, or social status. The event was further enriched with chanting of holy hymns & devotional songs and insightful presentations. The melodious bhajans acted as a panacea to divert the minds of masses from materialistic world. Divine Message of seers for a purposeful living through the Shri Krishna Katha at Nabha, Punjab 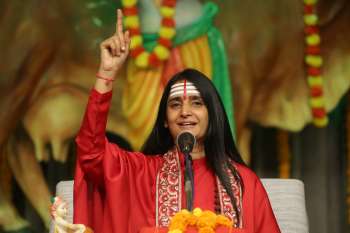